Would this story work better if I said that he hit me? What if I told you it didn’t matter that he didn’t hit me, that it wasn’t any different, really? Would you believe me if I said that the rape wasn’t the worst part? To be honest, the week he suddenly went quiet was worse. I had bought my favorite perfect, purple figs, but I could barely eat a thing. They sat in their green plastic baskets in the fridge, and a velvet mold grew over the top of them. Sticky syrup leaked from their split sacks and over the shelf. You look amazing, he said, when I saw him again, worn thin.

Most days adoration dripped thick off his voice when he spoke to me, like honey off those rotting figs. And there was the knife under his pillow and holes in the walls and fists in his voice and now and then too-rough hands on my body, shoving me away from him, or shoving himself into me.  I didn’t know you could all at once love someone and want to hurt them too. I didn’t know what that was called.

After he left, I woke up every morning when it was still dark and the sounds of the squirrels running in the walls comforted me. At least my greasy-haired landlord said they were squirrels, and I believed that then, too. Like I said, I was young, and I didn’t know much about lying yet, either; they were probably skinny white rats with red eyes and tails like bald pythons whipping around behind them in the pink cotton-candy insulation. But they needed a place to live, and my face is a little ugly in the first morning light, too.

Why am I writing about him now, a decade free? Because yesterday a different him turned a sunflower face to me—blue eyes, the right one with the freckle in it—and said, You hurt me. I hadn’t meant to, it is true, and even after apologizing, I leaned toward him all night long. My heart was wet and sorry, and I wanted to fuss, to pet, to sew up the little hole I tore in the thing between us, though I could see it was already coming back together, each breath, each thrust, a little stitch.

Today, I wake into the tide sounds of my blood rushing back and forth. I stroke his cheek. A bird splatters a red sound across the silence. We kiss, and I leave. I am alone on the subway platform, and I remember that I hurt him, and I didn’t know I could do that, and I’m smiling at his love, at my power, at my new, small knife.

Hope Henderson is a PhD candidate at UC Berkeley. Her work has been published or is forthcoming in Hypocrite Reader, The Mighty, Monstering, Jellyfish Review, and Avatar Review. Find her work at hoperhenderson.com and follow her on twitter at @hoperhenderson.

Stephen »
« How to Do a Close Reading 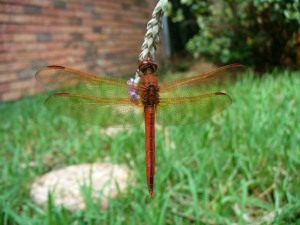