The Sky Was Electric Blue

The woman smiles at her baby through the rearview mirror when the car ahead of her swerves and the space opens up between them, wide as a life, then the tiny, moving child. She slams on her brakes, but time stretches out, long like labor pains, as tire makes contact with trike and pushes it forward, a flash of white and grey and blonde and metal.

The sky is electric blue. She will remember this, the sort of day you could fly kites on she’ll say later, only she had rushed to the store instead, to pick up spaghetti for dinner, an afterthought. People flock to the intersection as her car slides still, their heads turned toward her, blurred in horror. Her baby cries from the back. The clock reads 3:37. Cans of tomato sauce roll underneath her seat.

After the wreck, the woman doesn’t know whether to check on the child and leave her baby, or stay with her baby and abandon the child who has been swarmed by the other mothers and fathers. She imagines the child’s parents mourning, her baby taken far away, handcuffs, concrete and metal bars, men with badges. Firemen appear, yellow EMS trucks, a stretcher. Someone asks if she’s okay, then to see her ID. I’m a mother she says, as if this might change anything.

Her limbs move slowly, senseless. She reaches for her phone to text her husband, fingers fumbling, and sends a photo by mistake, one she snapped earlier that day of the baby eating peas and smiling, a lifetime ago, the word “accident’ following it now inexplicable.

She’s been to this place before, once in her twenties on a dark overpass when she hit a patch of ice that sent her car spinning, and another time more recent, while her husband was sleeping, amid the cool white tile and porcelain, a piece of her lost in tears and blood and tissue. She unsnaps her son from the carseat, takes him in her arms to wait for what will happen next. She listens to his breath, the sound of her heart beating while she asks herself again and again and again and again: what else could she have done?

One thought on “The Sky Was Electric Blue” 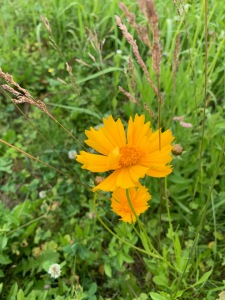